Before I say anything, I want to state that in no way is this BLOG intended to cast dispersion on Trade Schools.  It is painfully true that this country needs more people who can fix and build things, instead of just moving money around.

I read an essay in the Washington Post this past week by Fareed Zakaria in which he speaks to the issue of some of our political  leaders as emphasizing the need for more engineering and science curricula in colleges and the de-emphasizing or even elimination of the humanities and arts.

When I went to college at SIU in Carbondale Illinois, the first two years were devoted to “General Studies”.  students had very few “electives” options and were required to take, such “meaningless” course as Philosophy, Music Appreciation, Literature and yes physics and chemistry and language.

Today, in many large “Trade-iversities, students are required to declare their majors upon entering the system.  This is not only ludicrous, but I believe damaging to their development as total students and citizens.  Do we really believe that the average eighteen year old knows what she or he “wants-to-be-when-they-grow-up”?  I did not – I started out in engineering and my career in in advertising and media planning; and I will bet that a lot of us out there are not working in the fields of our chosen majors in college.

I see this problem as one, in large part, due to the insanely high cost of getting an education, today,

“… get that degree and start paying off your exorbitant student loan…”,  is a huge road block to an expanded curriculum.

President Obama’s initiative to make the first two years of trade schools, free is a great start in the right direction and should be carried over into the university system as well.  Ten percent of the military budget would go along way into starting this process.

Many CEO’s will tell you that a prospective employee with a more liberal arts background makes a more creative and total, employee.  As  Mister Zakaria points out, While U, S. test scores in Math and science are below those in other countries our inventors and scientist are still the most productive and creative in the world, due in a large part to our liberal education background.  The best test takers in the world – the Japanese and Chinese, are still better at copying than at innovating.

Sure, we need engineers and scientists but they should be able think in creative, and philosophical ways.  Let the trade school teach the trades – our universities should supply a more well rounded education.

LET’S START WITH THE OSCARS. The audience for the Oscars has fallen again this year and no wonder.  What a slow, unfunny show it has become.  With the exception of a couple of women, one gay and one black rapper, the acceptance speeches were total white bread and banal. The MC was unfunny and insulting without being humorous and the show looked like it was thrown together like pieces from someone’s  yard sale. Enough. STEADMAN – If you haven’t seen or heard of it, and have any appreciation of the art of Ralph Steadman, I highly recommend “For No Good Reason“, a documentary on this sardonic genius, his process of creation and his relationship to Hunter Thompson.  Hosted very low key by Johnny Depp with appearances by Terry Gilliam and the late William Burroughs, among others, it is a visually stunning couple of hours. See it!   It’s on Netflix. THE NET – It looks like we have won one against the big boys – at least the first round.  Net neutrality has been saved by the FCC.  And while the monsters of Cable have promised to fight it, all of us who have become as dependent upon the internet as we are on oxygen, can breath easier for a while.  Hang in there and keep after them. See you next week..

If you haven’t been to the Bath House Cultural Center at White Rock Lake Park in Dallas, it’s time to venture out. This modest gallery and live theater venue has some surprisingly good art exhibits and plays.

The exhibit that is opening next week, El CORAZON, is an annual event with some fabulous regional artists exhibiting works that will knock you out. Just in time for Valentine’s Day, one will find everything from sentimental, to religious, to edgy,—art, sculpture, and photography.

Admission is free and so is parking.

They also have quite a variety of live comedy and drama on an ongoing basis.

It rests at the foot of Northcliff Drive off Buckner, between Mockingbird and Lake Highlands.

Please, visit it soon. Check it out and get more info at:

You will not be disappointed. 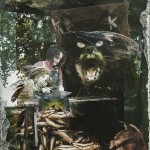 The Fishmonger & the Demon Cat 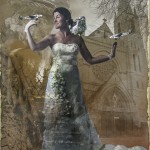 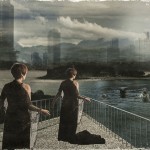 The Selkie Returns to the Sea

Today’s blog will not be about media planning or media buying, but rather the announcement of a very special event involving my partner and spouse, Sharon Shero.

The New Orleans Photo Alliance’s juried Members Exhibition has selected 3 works from Sharon O’Callaghan Shero’s new series, “The Sacrifice.”   Accepted works include “The Selkie Returns to the Sea,” “When You Wish,” and “The Fishmonger and the Demon Cat.”

This is a prestigious honor bestowed by one of the premier photography organizations in the country.  Sharon’s “The Sacrifice” series is a cutting edge collection of photomontage, mixed media and assemblage pieces inspired by of Irish folklore, religious anecdotes and stories told by her mother.

If you are in the Magazine Street area of New Orleans on or after June 8, please stop by the N.O.P.A. gallery and see Sharon’s and other fine photographers’ work on display there.

And by all means visit her website  www.sharonocallaghanshero.com to see the entire series and other great finds.

The exhibition opens June 8 and continues through July 1.